It’s been a while since I played with some data visualisation in D3.js, but when I saw the chart below I decided to get back to it. Even though (or especially because) the topic is not a funny one.

The huge number of talented people leaving Hungary to work abroad is a broad and serious issue, and Portfolio.hu did an excellent job in debunking the clearly false (falsified?) official data from the government. The methodology and the numbers are not perfect but still the picture emerges from the numbers.

Here is the chart about their findings from the article. 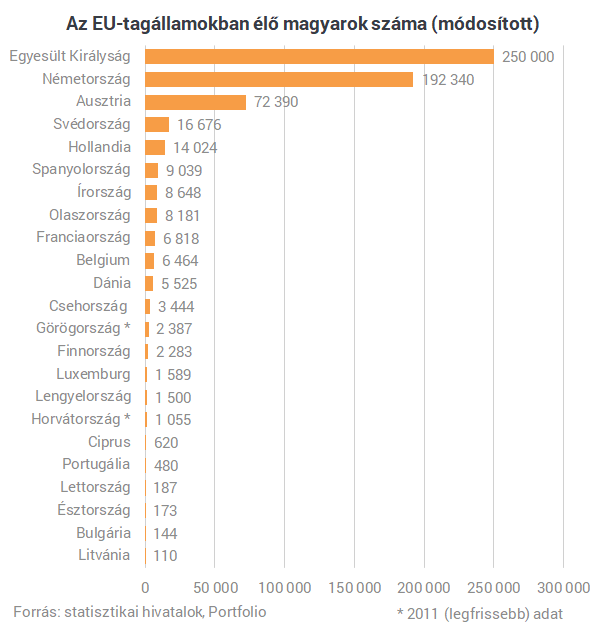 Giving it a boost

I thought that this issue might deserve some visually more appealing format than this dull bar chart. Don’t get me wrong, I’m guilty enough in producing thousands of boring charts throughout my career, and in many cases an efficient, simple approach might be enough.

But I had some time to spend on this, and here’s what I managed to put together using the same numbers (works better on larger screens):

(You might realize that some important countries are missing. Romania, Slovakia and Slovenia was deliberately left out by Portfolio.hu for the potential bias caused by the local Hungarian minorities.)

I spent quite a few hours with this, partially because I never used topoJSON and geoPath before (these are needed to draw the shapes of the map), but mostly I was experimenting with the code for fun before settling with the final version.

It’s not a mind-exploding super-exciting piece of data art, just some basic elements glued together, and there are endless possibilities in enhancing it. Still, it might convey the message better, or even draw some extra attention compared to the original version.

Which one do you like more: the original bar chart or the map version? Let me know in the comments!