Found this table on Big Picture about short-term performance of the biggest robo-advisors. It’s worth noting few things. (I don’t have a subscription to Barron’s, so I haven’t read the underlying article itself.) 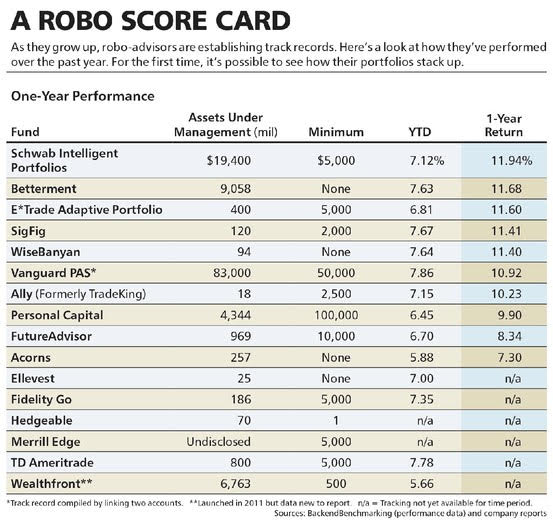 First, 6 out of 16 is so young that not even 1 year track record is available for them (Update: this statement happens to be simply false, some of these players do have longer track record, it’s just not here.). Assessing any investment vehicle based on the performance of 1 year (or even 3 or 5 years) is like gauging the climate of a city based on a randomly chosen minute in the year. You’ll never know how hot or cold it can get there.

(The ‘oldest’ independent robo, Betterment has 7 years of history (still not a lengthy track record), but it spent those years entirely in one of the longest and steepest uptrend in the history of stock markets. Not a real benchmark.)

So all those investors who choose to go with the robos are only following their faith and nothing else. Therefore the day of reckoning will come at the next major downturn (I have no idea when it will be), when the algos and also the investors have to prove themselves rational, consinstent and focused on the long-term (I bet not all of them will).

Don’t get me wrong, I’m a huge fan of the idea of cheap, efficient, rule-based, automated investing instead of overpaying useless (or even harmful) human advisors (that’s especially true in Hungary, where real quality independent advisory is extremely hard to find, to put it mildly). But it does not mean that these specific services are really already that sophisticated that many customers expect them to be.

Also, it’s clear that even though the few biggest independent firms that started the ‘robo-revolution’ are still substantial, established players are coming up in this field. Vanguard already dwarfs them in terms of AuM and Schwab also manages double the assets of Betterment. No surprise that many of the newer, smaller robo players decide to partner with big banks instead of fighting for customers alone.