Only a few days after my previous post I started getting congratulations for pinpointing the top of the crypto bubble. I was surprised partially because I rarely get direct feedback but mostly because some of this came from people whom I never thought would be interested in cryptocurrencies.

Yet, they reacted almost immediately to the drop that came after, which is not just a coincidence with the financial and mainstream media going nuts on the ’freefall’ of bitcoin. So I got curious: was this drop really something noteworthy?

Spoiler alert: it was not, or at least not in the context of the insane crypto universe.

On the charts below you can see the drawdowns of bitcoin, ethereum and litecoin from the past three years. The main point: even though bitcoin dropped few percentage point deeper in December than the previous throughs, it is still in the range of ’business as usual’. It can easily get worse but it does not qualify as a collapse yet.

(For the uninitiated: drawdown is the relative price decrease from the previous known peak in any given moment, so it’s mostly negative and equals zero only when the price itself hits new highs.) 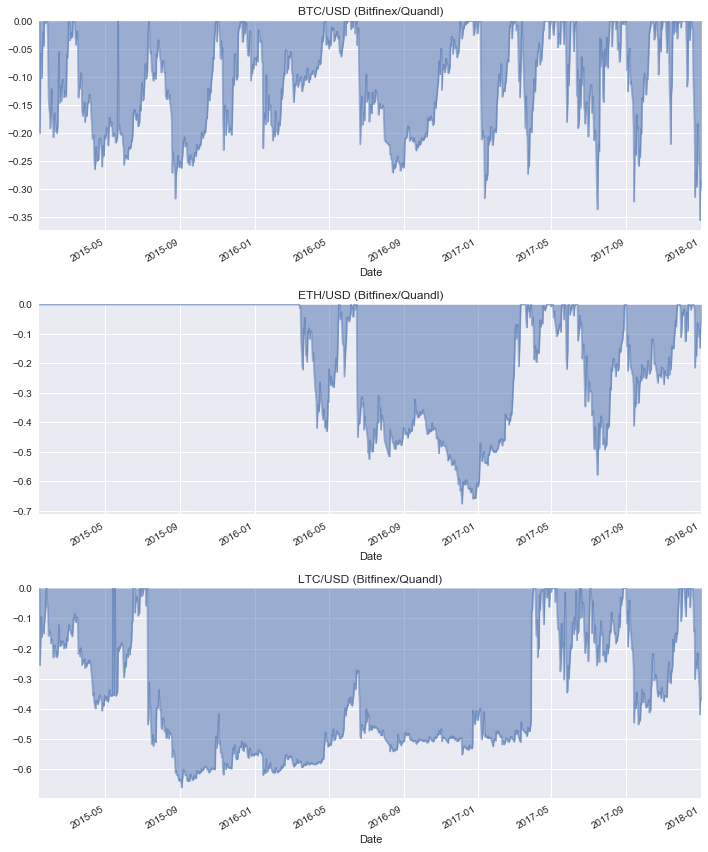 I obtained (free) Bitfinex price data via the Quandl API. It only starts from late 2014, except for ethereum, which starts from early 2016 (hence the flat line on that chart). I adjusted the starting point to Jan 13, 2015, when bitcoin hit the low after falling almost 90 percent from 2013 peaks, to only include drawdowns of the extreme, 60-fold rise in the past years.

Few things that pop up in this story:

1. Never listen to the media

It’s just an amplifier of your own beliefs and fears, run by people who are just as clueless as anyone else but play it out on your psychological blindspots.

And compare current things to events that already happened. In this case I looked at 3 years of history, which is very short, but given the intensity of the bitcoin story, it can already provide some sobering context.

And especially don’t trust anyone else’s predictions, no matter how much your psyche craves for being told what’s going to happen. Most ’experts’ try to make the Big Prediction That Becomes True and Makes Me Famous (I was guilty in this, too!), and all the financial and psychological incentives are set up to support this. (I wrote about the pitfalls of experts here.)

It’s amusing that I published my post exactly the day when bitcoin took a turn, but it’s still just a funny accident, nothing more. I have no idea what’s going to happen. I wouldn’t be surprised neither if we saw even higher peaks soon nor if the situation escalated into a real collapse. I’m still leaving the party anyways.