You know that feeling when you find the banknote that you left in the pocket of your winter coat last spring? I know, too. That’s how cryptocurrencies became part of my portfolio.

In the summer of 2016 I bought a few ethers of the Ethereum network for a symbolic sum, just out of sheer curiosity. I downloaded clients, tried few wallets, looked at exchanges and made a few transfers to get some feel of the whole thing. Maybe two months later I spent a minor amount and then completely forgot about the rest.

Fast forward to spring, 2017, the price of ether already rose eightfold (and later tripled from there), bitcoin was on the run too, and cryptocurrencies was all over the news. That’s when I realized the play-money I spent on ether became a considerable sum. Not fortunes in itself but already comparable to the smallest equity holdings in my portfolio.

And it was growing every day. Besides spamming the KBC Securities research team with hourly price updates (that was fun!) this introduced a few interesting and somewhat stressing questions too.

The price of ether in dollars. That’s crazy!

I’m still not a fan

I was always sceptic about the fairy tale of cryptocurrency revolution, and especially with the current frenzy of so-called ICOs (initial coin offering, named after initial public offerings or IPOs of stock markets), the ever growing list of alternative coins and tokens, miners transporting computer hardware with rented Jumbo Jets, I think we have an ideal setup for a mania.

But as with all the manias in the history it’s impossible to predict when and how it ends, and how high it can rise before the inevitable collapse. It’s even hard to tell whether it’s really a bubble in the first place (in hindsight it is always easier).

I realised this through my own mistake, the biggest failure in the history of Dotkom and its humble author. Long story short: I wrote about the grim future of bitcoin exactly the day the price reached its bottom in mid-2015. In a matter of months the price of bitcoin tripled.

I learned the lesson and took a more cautious stance of not trying to predict anything in the cryptocurrency scene (or any other market, by the way), even though I still think that these instruments are not money and can hardly be considered as financial investments at all.

You get the contradiction: I don’t think it’s real, but I also happen to own it, and yet, I try not to cater any expectations about its future.

Owning crypto is not investing in blockchain

The underlying technology, the blockchain itself does have merits, but most likely by the time it finds it’s practical place in the world it will be an invisible, background architecture hidden from the end-users. Just as the bigger part of the huge system that provides the ‘internet’ is mostly unknown to average households.

I also like the idea of Ethereum being a distributed supercomputer processing smart contracts, pieces of software specifically designed to complete transactions when certain conditions are met. But the practical implementation of this concept and the whole blockchain is still too inefficient (think of energy consumption), volatile, complex and unreliable for the greater public to comprehend.

Even if it’s viable in this form, owning cryptocurrencies does not mean you are invested in the future of blockchain, just as owning random dotcom stocks in 1999 did not give you any future profits from the maturing of the internet. Unless you happened to own strictly the few (future) survivors and held it for at least 10 more years, which very few did.

How I handle the portfolio?

So, to ease my mind, I decided I will not count my cryptocurrency holdings towards my investments at all. Therefore I’m not bothered by its extreme volatility and don’t mix my long-term investments with short-term speculative whatnots. Worst case I lose some or all of what I luckily gained, but it should not affect my real investment decisions in any ways.

I also decided not to stop this adventure by cashing in the short-term gains. At least I can satisfy the (lousy) trader part of me by doing something and checking prices every now and then, so I can really leave my long-term equity holdings in peace.

When the price of ether dropped from its peak in June I temporarily sold part of it, so I had somewhat lower exposure during the subsequent 50-60% drop, but I gradually ’reinvested’ and also ’diversified’ between ether, bitcoin and litecoin. There are no scientific reasons, this diversification is just an illusion, as the prices tend move hand-in-hand with each other (*). But I plan to keep it that way.

This is how it looks now: 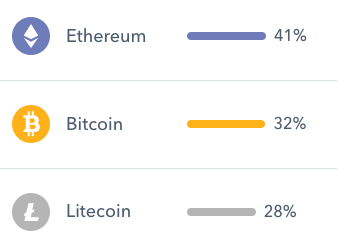 But the main (only?) benefit of holding some cryptocurrency is that I’m naturally inclined to keep one eye on the crypto scene in general. Which does not mean I intend to abandon my scepticism anytime soon.

(*) Speaking of correlations, there is a theoretical way cryptocurrencies can be beneficial to an investment portfolio: if the inevitable crash comes on stock markets and the cryptocurrencies turn out to be uncorrelated to other instruments, they can decrease the overall volatility and provide some diversification benefits. But as there is no sufficient data to support this idea it remains an imaginary benefit that I think noone should really pursue.